I’m going through a strong street photography phase, which makes for a nice change from architecture and illustrative editorials. I quite enjoy street photography, probably because it’s a bit of an adrenaline shot and unpredictable.

I’m still in Rio, with lots going on. I’m flowing with different ideas to turn my stock photos into cash, and having some fun.

The Girl from Ipanema

I was walking along the promenade of Ipanema, enjoying a coconut as one would while there, when I noticed this dark-skinned athletic woman confidently walking down the promenade. I noticed that in the space of a few minutes, at least three men flirted with her.

I immediately thought of the iconic song, Garota de Ipanema. Here are the lyrics translated into English:

I followed her for a bit and just about managed to get a few shots. The following being my favourite:

A great shot and would be a pity that buyers won’t find it, so I did my best to caption it and keyword it to the best of my abilities:

Ipanema beach is divided into different sections, with one of them being being gay-friendly. Again, taking advantage of the opportunity, I caught another story of two men heading down this section of the beach.

I think this is a strong & versatile shot that should feature heavily in all sorts of travel media. 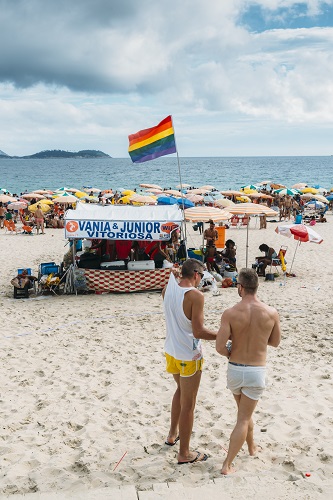 Capturing the not so pretty side of Rio

Just wondering around, I stumbled upon this tragic story. A wonderful and simple metaphor for what is really behind the city’s beauty.

In the spirit of street photography, I didn’t hesitate to capture the scene, even if the man was half-awake.

Today I was on the roof of a shopping centre in the Leblon district capturing a panorama when I noticed some noise coming from a nearby building. I saw some police officers outside a residence ready to raid an apartment. Nightcrawler-style, I captured a few shots and have submitted them to Alamy Live News and Rex Features. I then got the hell out of there!

On the other side of the shopping centre’s rooftop I saw a funny situations of people talking outside a window. More of a cartoon than editorial. It’s a really tight crop so most agencies won’t take it, unfortunately. I have submitted it to Photo4Me though (which they have duly accepted), a Print On Demand Agency I’m actively submitting.

An apparently growing trend is Stand Up Paddle. This is an off-shot of where paddle boarders stand on their boards and use a paddle to propel themselves through the water. Looks quite fun.  I managed to capture quite a few of these adventurers with the following being my favourite since it has such an iconic background: 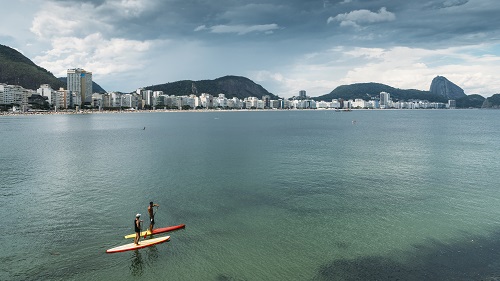 I’m pushing the envelope lately trying to capture some of these shots and I’m well aware that I’m taking a few risks here and there. But that’s what street photography is all about. Here’s some more key pointers: