Have you ever taken a shot / clip that you thought to yourself, “wow” and knew immediately would be a strong-seller? I have many times and some do end up being strong sellers. However, the majority don’t!

In this post I’ll discuss such shots which I had great hopes at the time which never materialised. I’ll try to examine why and discuss strategies that may work in the subsequent “wow” shots to ensure success. I hope you’ll be able to participate with your own “non-sellers” in the comments section.

One small note: I’ll discuss images which are at least one-year old. If they haven’t sold a few times by then, chances are they’ve been dumped into the never-regions of search engines forever.

While wandering around Ipanema beach in Rio de Janeiro, Brazil, I spotted this gorgeous, athletic afro-Brazilian woman (“Garota de Ipanema”) from afar and followed her a bit to see if I could get a good angle of her. I almost gave up as she strolled past me and the scene was busy so was difficult to get the right composition and focus. At the last minute the scene opened up and I spotted a man cat-calling her. A tighter crop later in post-processing and bang, that’s the shot.

I placed the Garota de Ipanema everywhere and RF and tagged it as accurately as I could. It has sold but only for a few subs here and there, unfortunately.

Perhaps it’s a weak argument: As you probably know, there’s a big “metoo” movement now against “sexual harassment” and whatnot (not that this is such (but who knows these days as we live in an Unbrutally Honest Politically Correcet world) and buyers may be reluctant to use this type of image.

The scene is also a bit messy but what can you do about an editorial? Perhaps in the future I can try to recreate this commercially but may prove tricky in a public place with so many people around… 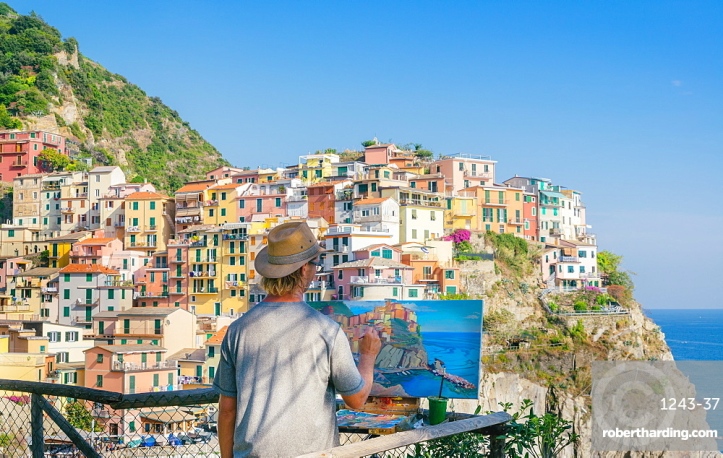 Glorious summer day in Manarola, Cinque Terre and between a gelato and pasta, I was looking for an unique perspective of an otherwise saturated location. I hiked for a few minutes to obtain a better perspective and saw a dude making a water-paint of the town below, adding a beautiful foreground.

Probably was a mistake to send it to Robert Harding who immediately placed it as a Rights-Managed. It has sold but for very disappointing prices. I believe if I had placed it everywhere and RF it would have had moderate success. 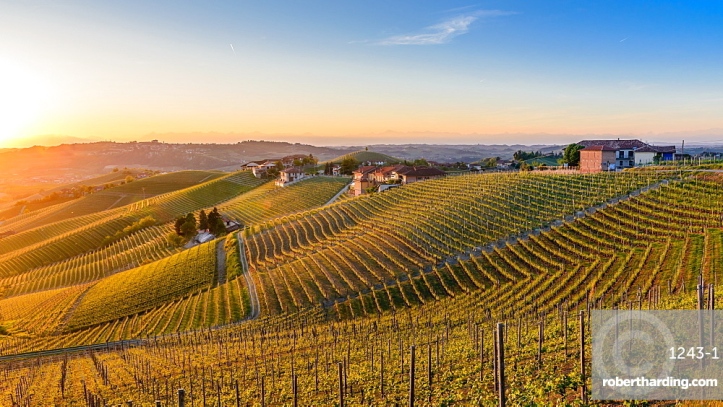 Shot this near the UNESCO World Heritage vineyards near Barbaresco, Italy during one of my cycling marathons in northern Italy. Just five minutes later it would have been too late…so I managed to setup the tripod just in time (these days I would have also done a clip).

This was the first image I uploaded to Robert Harding during my more naive days. Again, I believe I would have had much much much success if it had been placed at all agencies as RF. It’s premium but also generic enough for repeat sales.

Shot this at the Wailing (Western) Wall in Jerusalem. A serious sombre place for reflection and out of nowhere popped a kid with a clown mask holding candy. Instinct took over and shot it and thought about the scene later on. Turns out it was related to the carnival period.

I placed it on Alamy as Rights-Managed exclusive and has never sold. Perhaps it’s too “fine artsy” and difficult to place it in a news-piece or perhaps too risky. I don’t think there’s anything else I could have done. I didn’t want to spread it around because it may be used in a weird way to promote anti-antisemitism.

One of the memories of that iconic trip to Israel, I suppose. 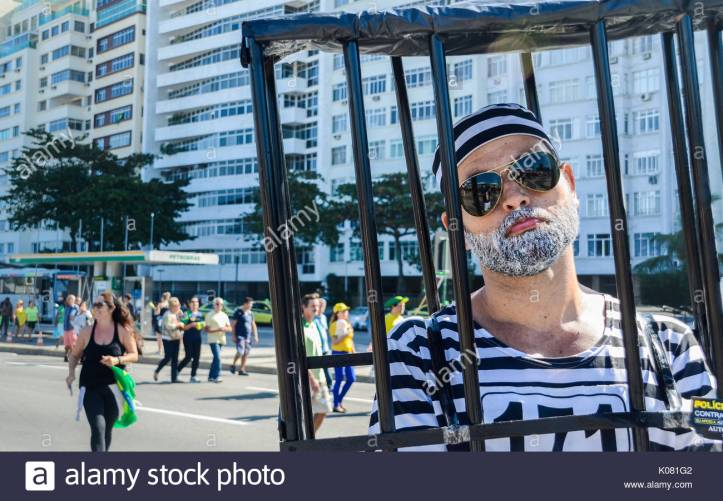 I attended an anti-corruption protest in Rio de Janeiro, 2016 just before the start of the Olympic Games. I captured a shot of a man dressed up as locked-up ex-president Lula with a mock cage around him. Cleverly, I framed one of the petrol / gas stations in the background belonging to Petrobras…which is relevant to the story since it’s where a huge corruption scandal was uncovered, eventually leading to the impeachment of Dilma (to make a long story short).

You may read more about it in my article entitled, “Brazil: Country of the Future?” over at Escapeartist.

I placed it as Rights-Managed Exclusive. This was before I was uploading regularly to Alamy Live News and eventually REX Features. Nevertheless, as a stock pic, it had non-breaking news value and potential for repeat-sales as the the corruption scandal was ongoing. In fact, it was only two years later that Lula was finally jailed.

I was silly to restrict it in such a way. It would have probably sold regularly as repeat sales on micros as an RF file. I may dig up some archives and try to find the native file for this and upload it anyway but perhaps I’m too late.

In addition, the way I captioned it and keyworded could have been better to describe the scene. Thus this diminished it’s value in the search engines. 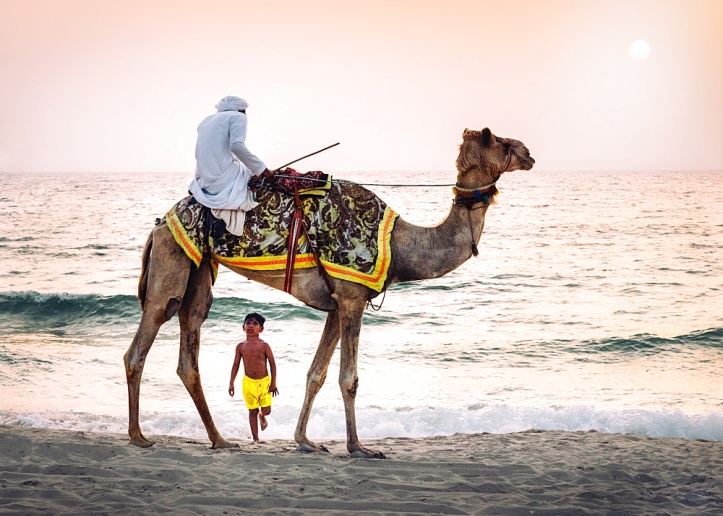 Captured in Jumeirah Beach in Dubai, UAE, props to me for successful capturing this moment after a sprint frame the boy underneath the camel’s legs, in low light. However, this effort has not been well-rewarded.

This image was shortlisted in the 2017 Travel Photography of the Year Image competition where I was shortlisted. They asked me to write about the background to the image:

“The random encounters between different cultures continuously fascinates me. Captured in Dubai, UAE, a boy interacts with an Arab man wearing a thawb, sitting on a traditional Bedouin blanket.

Camels have traditionally been a key part of UAE’s rich cultural heritage, providing both transport and food in Nomadic times. During a time when Dubai is modernising at lightning speed, it is interesting to see a dramatic link to its past.

The setting is full of possibility, with the composition conveying both a respect for the past but also hope & curiosity for the future. The creature dwarfs the boy, yet he appears safe and protected within a frame, perhaps a reference to a ‘shrinking world’.

Conceptually, the image engages us on an emotional level and invites the viewer to question many things, such as how this encounter will affect the boy’s perception and outlook growing up in modern Dubai?”

Fun trip, nevertheless, and happy that RH promoted my Dubai Trip on their blog.

No idea. It’s a great shot. The only thing I can think of is that it’s an editorial because the boy is clearly identifiable, thus diminishing it’s value to promote travel-related products and/or services, but shouldn’t make a huge difference.

I don’t regret placing it exclusive on a premium agency. I don’t think it belongs in micros.

I’m more patient with clips that don’t sell because I know they take much longer and when they do sell, earnings can be much more interesting than images, especially if in 4K. Nevertheless, I’m quite disappointed that the vast majority of my clips from my Iberian adventures a year ago have failed to sell, including my favourite, captured in Seville:

Not sure what I would have done differently…perhaps a hyperlapse? The still from the same angle has also never sold. Frustrating.

Are you also frustrated with your favourite shots?

If so, please comment below with a link to the image/clip. Also include why you think it’s special about it and what you could have done better and how you hope to improve for next time.

If you feel that the information below and throughout the blog is useful I kindly ask you to donate as much as you feel is reasonable, such a price of a coffee, by clicking on the following link below:

You can also support me by purchasing one or more of my images as a wall-hanger:

I’m an eccentric guy on a quest to visit all corners of the world and capture stock images & footage. I’ve devoted six years to making it as a travel photographer / videographer and freelance writer (however, had recently go back into full-time office work to make ends meet!). I hope to inspire others by showing an unique insight into a fascinating business model.