Wemark will be the first stock photography agency to utilise the zeitgeist blockchain technology in its marketplace.

Wemark are looking to take on the Goliaths of the stock photography industry, such as the likes of Getty, Shutterstock and Adobe Stock by adapting revolutionary blockchain concept to the stock photograph marketplace. By linking buyers and contributors directly via a Blockchain, thus eliminating the middle-men, they’ve promised to set contributors’ royalties at an attractive 85%. However, there are more questions than answers, keeping in mind that these are the early-days of that Startup.

I trust you’ll find this brutally honest (non-techy) review useful and please comment below if you have any questions or general comments. To be honest, I’m learning as I research and still have many questions.

Let’s rewind a bit on what this means, without getting too technical. Onto a quirky video by Wemark, featuring Vincent Van Gogh, to illustrate how the concept works:

According to Wemark, the major stock agencies have become “too centralised and powerful”, with only a few heavy-hitters controlling the majority of distribution. This in effect means that contributors have to put up or shut up, as we see our work being licensed for fewer royalties and by wider usages. Difficult to argue against that.

As mentioned earlier, Wemark promises to pay contributors 85% commission, with contributors being able to set their own prices.

Last I checked, the big agencies took their pound of flesh:

How can they afford to pay 85% royalties?

Wemark can do this since they’re cutting down considerably on their own business costs by bringing in the “decentralisation that the Blockchain-technology offers”:

Here’s straight from the horses’ mouth:

“The blockchain and the new possibilities it provides (immutable ledger, smart contract, cryptocurrency) introduce an opportunity to replace the traditional distribution channels of digital content. While current digital content distribution methods might help creators reach a large and global audience, it leaves them with a fraction of their content’s worth and very little control over their rights including the way it’s distributed.”

Ok, that’s a lot of techy language…but I’m not done quite yet…

I hate marketing-speak, so getting straight to the point…what’s in it for contributors? I took this screenshot from their website. Then I’ll analyse each of these claims separately:

Large part of our revenue: Absolutely. Can’t argue with the math that 85% is higher than the usual 15%-40% that we’ve become well used to by now.

Transparency and control: Depends. My Rights-Managed sales on Alamy are well-documented, for example. Otherwise, I would have to agree that once it’s been licensed as RF it’s difficult to crack down on infringements and misuse. According to Wemark’s white paper:

“Wemark’s distributed marketplace approach guarantees, by design, full transparency regarding all payments, licenses and revenue distribution. The protocol will ensure the privacy of customers, while providing a way for photographers to identify copyright infringement, license overuse, use of their photos that should be restricted and other license violations.”

I would be curious to know how they hope to keep track of RF licenses and dealing with infringements, but I like what I hear so far. Will they offer RM licenses? Exclusivity?

Rights over their content: This one is just ridiculous. I’ve never heard of an agency asking me to sell my copyright, other than perhaps Shutterstock Custom for one-off projects ($50 for 4 images usually). They should strike this off as an USP asap as it’s misleading.

Warning, it’s about to get even more technical.

The idea is that buyers would purchase crypto-tokens to license images using payment methods such as Credit Cards, Wire Transfers, Bitcoin, Ethereum, etc. Fees may apply for converting funds from each different payment method to WMKs (effectively their own digital currency).

Contributors would then be paid back in the same WMKs. The price of WMKs, I would imagine, would fluctuate in value vs other currencies & other cryptos. WMKs would be able to be transferred to different currencies, incurring some fees, naturally (how much remains to be seen).

WMKs may be used to pay to invest directly in Wemark, as stated by them:

No word yet on how much $1 is worth in WMK and how they plan to fix such rates which would fluctuate wildly, as seen by the recent turmoil in Bitcoin & co. However, the situation may become clear from May 7th, 2018 as we’ll see how many shares will be purchased in the Token Generation Event (TGE): 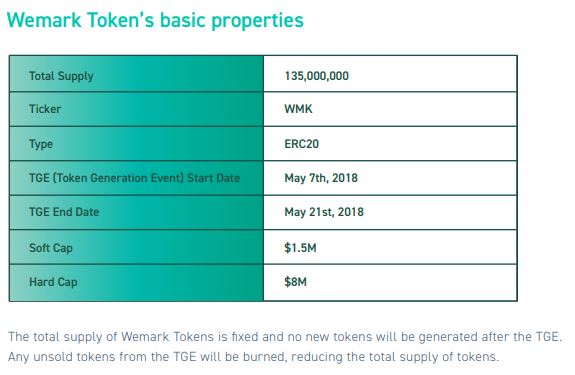 To wrap up this topic, here’s Wemark’s Co-Founder & CEO, Tai Kaish, explaining what WMks are all about:

Getting started as a contributor

Piece of cake. The site is impressively easy to use.

Simply upload your photos, which should already contain metadata (max 100 at a time), then send them a copy of your digital ID. How do I know? Because I already submitted close to 1,000 of my own images. What, you think I waste time? 😀

There’s no ability to price as of today as image still have to go through QC. I have a number in mind on what I should charge, but am curious about which types of images they accept first.

The faces behind Wemark

Wemark is a Venture Capital-backed startup based in Israel and San Francisco. The Founding Team has an impressive wealth of knowledge in the technology sector.

Granted these young guns have knowledge gaps, so they’ve hired the expertise of a diverse advisory board of industry experts with vast experience in stock photography, network effects, marketplaces, copyrights, blockchain, security, venture capital, and more.

Early Bird Gets the Worm

According to the timeline on Wemark’s website, they will be launching an alpha version marketplace in June, with a beta version expected in Q4 2018.

Being an early adopter in this use of the Blockchain technology, which is still in its infancy, has many potential benefits, including:

Be aware of the marketing-speak

There is A LOT of marketing-speak on Wemark’s external communications. I can see how it works well when pitching to VCs who are tech-savvy, but it needs adapting to fit the new audience of buyers and creatives. Blockchain is highly technical and I’m trying my best to get my head around it…

Since it’s their early days, I’ll go easy on them but I hope they make it easy for the layperson to understand the concept. If non-techy buyers won’t understand it, they won’t trust it and will shop elsewhere.

However, the overall ethos is revolutionary and interesting. The key selling points are earning 85% royalties and being able to set your own prices (none of this nonsense about taking back control).

I’m curious to see how the big boys of the stock industry adapt to this possible disruption. Will they just sit idly by like Blockbuster and Kodak before its too late? Of course, it’s early days since Wemark only has 40,000 images compared to the 180+ million at Shutterstock & co, so I am getting way ahead of myself.

Most Startups fail in their first year

Truth be told, most start-ups fail in the first year so try to manage your expectations. However, these guys seem to have a lot of money behind them and a wealth of knowledge/expertise. Overall, I do like what I’ve heard and I’m willing to take a chance (punt) with them as they get set up to launch soon and start their aggressive marketing campaign to attract buyers.

Everybody knows that the stock photography industry is in dire straits. Royalties are generally going down the drain due to oversupply with the big agencies making it more difficult for contributors to generate a decent return on their hard-earned images.

God knows uploading more images to the likes of iStockphoto isn’t the solution, both for myself and the health of the industry. So, despite my initial hesitations, I’ve decided to take a chance with Wemark. I figure I have nothing to lose, especially since the images I’ve uploaded are non-exclusive and they’re already tagged.

It’s still very early days in their business and there are more questions than answers. I’m going to keep a close eye on them and of course keep you guys updated to what’s going on!

I hope you’ve found this review useful and if so, please give a link and comment below! For more information and an up-to-date discussion on the MicrostockGroupForum, check out this thread.

I’m an eccentric guy on a quest to visit all corners of the world and capture stock images. I’m determined not to waste my life away as a corporate drone and have devoted my five years to making it as a travel photographer and freelance writer. I hope to inspire others before it’s too late.