The weather has been weird lately here in northern Italy. Weeks of extreme heat and high humidity followed by a few days of unstable weather, including thunderstorms. This is great because I was getting tired of shooting blue skies and the heat was making everything really hazy. A bit of rain does wonders to clear the air.

I’m lucky that I live close to a major airport and a major park, so I’m often cycling back and forth on a loop (about 15km). Some oxygen to the brain does wonders to get the creative juices flowing.

Trying out some stock footage

Lately I’m trying out some stock footage. It’s a whole different ball game and enjoying the experience so far. Getting some good tips on the MSG forum.

There’s some beautiful wheat fields adjacent to the airport and with the changing light I tried some 30 second footage. Also took some pics, which have already been submitted and accepted at Shuttestock. Not the most exciting shots but remember that often boring shots do sell as it may meet the buyer’s needs.

Golden wheat field with blue sky and clouds in background

Golden wheat field with blue sky and clouds in background

The stock footage didn’t turn out so well, so I’ll go back there another time and re-shoot.

Next, I saw that a field had recently been harvested and there were numerous bales. Normally, I ignore these but the light was quite special. Here’s the best one from the bunch, which appears to be more premium than the others since it combines with an airplane and sky-scrappers background.

I’ve decided to submit this one to Robert Harding, a midstock travel agency. One lesson I hammer on and on is to submit your ‘premium images’ to midstock agencies, such as Alamy, instead of wasting them at micro agencies.

Robert Harding are super picky and may not accept it in which case I’ll relegate it to micros. In hindsight, I should have HDR this baby as part of the sky is blown out. 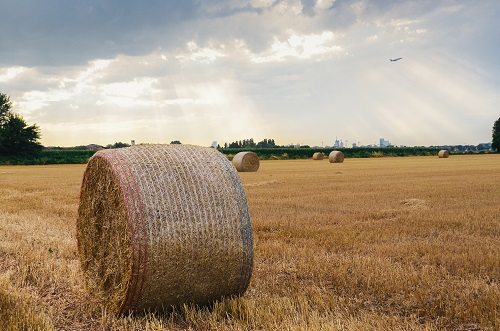 Arriving at the park it started to rain on and off. I spotted a rainbow and bang! Maybe this image will be my pot of gold.

On my way back I managed to catch some breaks in the rain and captured the following airplanes shots. I was using a 300mm lens on a crop sensor.

All this was about 2-hours worth of work, plus another hour post-processing. I’ll keep you up to date whether these are regularly downloaded. It’s tough to make a living off stock photography but I do try!

Author of the Brutally Honest Guide to Microstock Photography, purchase a copy today!