The longest month in many of our lifetimes is over and hope everybody is safe and comfortable. So sit back, get yourself a nice hot drink and get ready to digest this month’s Brutally Honest earnings report. Click here to check out my February 2020 Earnings Report.

Many of you kindly asked by email how I was doing and whether I managed to escape Madrid. The answer is yes., thanks..if I had waited any longer it wouldn’t have been possible. Now in relative safety in Portugal (after taking precautions coming from a high-risk area). Let’s get started…

But first, would appreciate if you could help me out!

If you feel that the information below and throughout the blog is useful I kindly ask you to donate as much as you feel is reasonable, such a price of a damn coffee (not as Starbucks though), by clicking on the following link below:

You can also support me by purchasing one or more of my images as a wall-hanger for a friend / relative.

Naturally, I’ve been going Coronavirus-Crazy in March with so many stock opportunities, where I wrote on capturing Coronavirus News Photos.

A day later, at Madrid’s Bajaras International Airport, I wasted no time to continue capturing content…and even on the flight to Lisbon itself while the passenger across from me was sleeping with a face-mask! 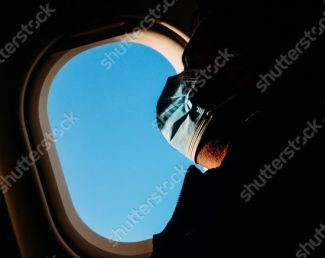 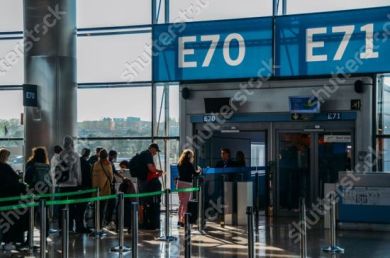 Despite or because of the commotion, I’ve managed a good effort of uploading 60+ images and at least 10 clips.

Some of the concepts have proven profitable, including the stop-sign below which is proving extremely versatile to insert into various composites, with one in particular coming in second place on the shutterstock seach engine for the hugely-trending keyword that is “coronavirus”.

May you take an educated guess as to which one is amounting for 80% of total coronavirus sales?

Timing is everything and I started creating these concepts long before they were starting to go viral in Lombardy.

And more recently this one, which I got the idea when the exact same image without t he stop-sign began selling suddenly.

So, try to think about what will happen in the  next few weeks and anticipate the trends….I’ll draft a blog post about this in April.

As for footage, I’ve made good use of my new wide-angle lens, including literally on the day that Spain declared a national emergency (March 13) and when I fled. I’ve compared a similar scene between a normal workday and that day just so everybody can see the difference in traffic:

Next day in Cascais, captured some empty scenes overlooking its gorgeous waterfront, as authorities advised locals to stay at home:

Such a beautiful spring light and clear skies (no airplanes), so I thought about creating some ironic “home-office” concepts (also as a way to tease some of my colleagues stuck in lock-down Madrid). Yes, I do have a very sarcastic sense of humour!

On that happy note, let’s get started!

Strong month on the stills-side:

Extremely disappointing month on the footage side.

Arcangel, the premium Rights-Managed exclusive book-cover agency which I’ve been happily submitting to for the past four years didn’t disappointment me in March with two book covers earning me $139 net each, for the following:

As for the second one, looks like the book hasn’t been published yet and I only have the title and author which is Angels Weep by Colin Falconer. They’ve selected this image I captured about two years ago in London of one of its cycling superhighways along the Thames, backlit. Quite average image if you ask me.

Starting with Alamy, wow what a month! If you’ve been following me for a while you will see that my earnings on Alamy fluctuate enormously month-on-month and usually disappoint. This month was the exception, other than the rule as I report 16 sales for $308 net.

Loads of pics from Milan were sold, perhaps owning to it being the global epicenter of the Coronavirus / Covid-19 outbreak, who knows. Well, here they are:

The above were all nice, but the standout sale this month was for the image captured in the summer of 2017 in Antibes, France.

Earned an extra 20% from it being exclusive, but ticking the “exclusive” button on Alamy’s optional menu. The reason why I went exclusive is that neither Shutterstock, not iStock would take them for being “non-licensable content”.

Anyway, if you have exclusive images on there, make sure you do so.

In addition, I put in a detailed description of the sculpture. Not sure if this swayed the buyer’s interest but if you have the time, it’s definitely worth filling out.

Not all great news from Alamy

Last month I reported that I was excited to spot some usages of my image on the Guardian newspaper (if you’re not familiar, it’s a MAJOR newspaper in the UK). 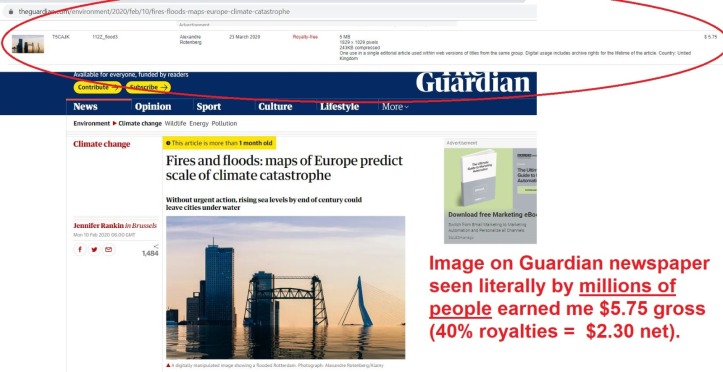 Now, this image was/is being seen by literally millions of people. The amount I’ve earned is a paltry $2.30 net.

Quite average month at AS with $77 from 89 sales. Not huge sales to speak of…with the largest being:

Not much more to say. I’m still bullish on Adobe Stock and believe they have what it takes to compete with the big boys. Not just quite yet though!

As quite mediocre month at iStock at $109 sales from 289 downloads. These are the highlights. By this point you can probably already see which is my “viral” coronavirus concept. The first one is pure trash! 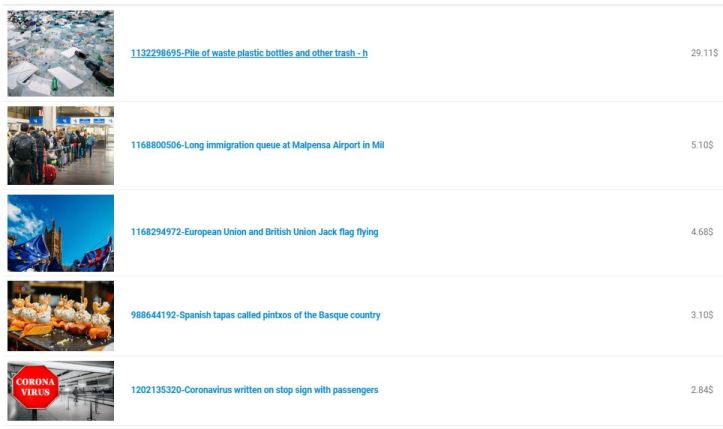 I did some fishing around and spotted some of my latest usages simply by searching on Google “Brasilnut1 istockphoto” for the past seven days. Interestingly, I found this broken EU flag in a German technology magazine. Curious to see how much it will earn next month but I suspect not very much!

The standout sale for the month was the following of a colourful facade of a building, captured in Lisbon, Portugal, which earned me a whopping $118.66:

What is most surprising about this sale is that, if you look closely you’ll be able to see some of my less than excellent rushed job at fixing the barrel distortions! I submitted anyway and boom! Just hope that the buyer won’t refund it after looking closely at the defections. That would be my first refund on Shutterstock.

On the same day, I had another Extended License sale of Terminal 5 at Heathrow Airport, which earned me $13.66. No lens correction work there.

A few days later, two images from the same shoot sold for $22.27 each by someone in Japan. They were captured at Milan’s Sempione Park overlooking Sforzesco Castle in the background.

It was sold on March 23, just when the virus was causing havoc on Milan and the wider Lombardy region, so perhaps they wanted to show happier days in that region with a millennial as the protagonist. 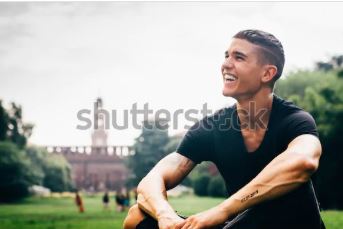 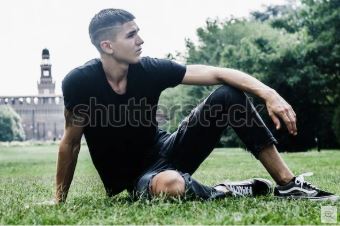 I wrote a fun article on this photoshoot from July 2017, which you can read about here.

Only one clip sale this month

As for the only clip sale of the month, I’ve put it towards paying off my gimbal investment, as I practiced using it at Lisbon’s zoo last summer. Fun day. This clip earned me just over $11.

So, it’s been a strange month as clips have totally fallen off the cliff just when sales were apparently picking up. Let’s see if I can recover next month.

Turd of the Month Agency

I should give the agencies a break for this month, considering everything that is going on. It’s not their fault that many buyers may have their minds elsewhere (that is if they will have income in the coming months).  Will be back next month.

If push came to shove, I’d nominate Picfair since I have over 5,000 images on there and haven’t had a sale for 4 months. Also losing patience with Bigstock which earned me a pathetic $3 from 3,800 images!

What’s in store for April?

Wish we could just wake up tomorrow morning and someone would tell us it’s all been a joke. Tough times for many people and  it’s going to get much worse before it gets better.

In the short-term, my plans include vising (from afar) a testing clinic they’ve set up in Estoril (next to my second home, guess where) and see if I can get some shots using my 200mm on a crop sensor. Other than that, it’s frustrating times for me and I’m sure for everybody else as we’ve reached a “depression-era”.

Perhaps I’ll create more concepts around this type of economic doom that we’re heading as we expect GDP to drop in many developed countries by at least 10% in the next 3 Quarters. I don’t even know if I’ll go back to Madrid for my office-job….

I’ll put together a detailed article soon on such concepts that may be profitable. I’ll have a good brainstorm. UPDATE: HERE’S THE LINK!

Use your time to improve your craft

Nevertheless, I would really recommend using this time at home to dig through previous batches and re-submit work which may have value. In addition, it’s a good time to study up on improving your craft.

Should I purchase a drone?

Now that I may be sticking around Portugal for a while, as soon as things go back to “normal”, I’ll look into purchasing a drone. Any thoughts….my budget is around $1k – thanks in advance!

Cicero Castro, based in the stunning Portuguese island of Madeira, also has some stunning drone footage.

Doug Jensen’s course is out with a 35% discount

Taking advantage that many are home and vegging away, Doug Jensen has released a discount on his course. Here’s a sneak preview:

Doug was keen for me to mention the following facts:

I’ve earned almost $12,000 just from footage I submitted AFTER my workshop was released in March 2019.  And my income (year over year) is rising faster than the size of my portfolio, so clearly the potential to make money from video is bigger than ever before — despite the doom and gloomers who say the glory days are over.” – Doug Jensen

How to take advantage of this great course

By using this link and inserting the following code, “BH1”, you will receive a discount of 35% off, which is valid only until April 4th!

Hope you take advantage and until next time!

I’m an eccentric guy, currently based in Portugal (fled Madrid to escape the brunt of this nasty Coronavirus), on a quest to visit all corners of the world and capture stock images & footage, when thing sgo back to normal. I’ve devoted seven years to making it as a travel photographer / videographer and freelance writer (however, had recently go back into full-time office work to make ends meet!). I hope to inspire others by showing an unique insight into a fascinating business model.