This being a brutally honest blog and all, it’s time to address these popular forum conspiracy theories head on. Are Microstock Agencies really fucking around with us?

I’ll address each of the most common conspiracy theories head-on and give my analysis. Let me know in the comments section your thoughts.

For our first theory, since veterans earn substantially more per download (see breakdown below) than newbies, Agencies will favour their images over veterans. Agencies therefore manipulate the search engine algorithms, by pushing newbies’ content to the top.

100 subscription downloads from a newbie portfolio will cost an Agency $25, compared to $38 paid out to a top-earning contributor (difference of 52%). This difference in earnings % is similar for other licence-types, except for footage which remains consistent at 30% regardless of your earnings.

In addition, apparently Agencies manipulate results so that newbies can earn “a quick buck” and keep them excited to keep uploading their crap images. Makes sense! 😛

The evidence presented by contributors supporting this theory in a thread on the MSG forum is sketchy at best.

Verdict: Although from a financial point of view it may make sense, from a both legal and ethical point of view why would any respectful Publicly-listed Agency want to conduct business this way (perhaps I’m being naive)? In addition, generally speaking, most newbies’ content is inferior to veterans, so why would they want to push such content to buyers?

Evidence supporting the general proliferation of inferior fresh images is indisputable since most Agencies have pretty much made QC a formality with only a light-touch inspection, hence bloating collections – see the graph below. An argument can be made that the growth of collection makes it more difficult for buyers to find their images among the masses.

The evidence presented by many veterans is that despite adding new and quality content, earnings have either stagnated or dropped. This seems fair enough. This can be due to a number of complex factors, including their respective commercial value, market forces and search engine algorithm.

However, one such widespread theory is the reason for this drop in earnings relative to new images is that Agencies manipulate the system to “cap” earnings on certain days/periods or a if a certain level of success is reached. Why? Again, probably to help push newbies’ content and spread the earnings.

This theory is combined with some sort of “floodgate” principle that the Agencies enable a “normal” amount of sales for a short period only to then suppress them immediately after. In other word, a great day/week/month then leading to a terrible day/week/month for no apparent reason (weekday, no major holiday, not in July/August/Xmas, etc).

Verdict: I can’t speak for others so I’ve taken a quick look at my July earnings at Shutterstock to see if I can spot any funny patterns which suggest manipulation. The following are the number of downloads per day (with bold as weekend):

At least to me, the above seems quite steady and consistent. A 40 download weekday didn’t proceed with a 10 download weekday. The worst was 31 followed by 13…which is within a standard variation. I did a quick check on other months and it follows a similar pattern.

Now my portfolio features predominately travel-related imagery from various countries, which should be quite consistent throughout the year. I can see how some veterans can experience drastic drops in earnings at certain times of the year – just think of someone with strong holiday-themed still images, such as Halloween and Xmas. I can image that from January until July, those images won’t be in that much demand (extreme example but hopefully you get the point).

Market is suffering from oversupply

One reason to explain the stagnation or even drop in earnings despite more uploads is that the market is suffering from an oversupply of images. Even if “the global stock images and videos market size are expected to generate revenues of over $4 billion by 2023, growing at a CAGR of over 5% 2017–2023“, the supply should be far outpace the demand.

As for seeing patterns where there are none, that’s completely “normal” and there’s even a condition called Pareidolia and an interesting article on the Observer on the subject: Pareidolia: Scientists say ‘don’t worry, it’s normal to see Jesus on a slice of toast’

Conspiracy #3: Some accounts are favoured

This is the most hilarious of them all, but hear them out.

According to this theory, some accounts which experience financial success are singled out and otherwise high-ranking content is limited in terms of their visibility in the search engines. Even more paranoiac, if a contributor speaks badly about said Agency in public, he/she will have their account flagged with reduced earnings.

Verdict: No doubt that this is a difficult time to be starting out as a stock photography, but there’s still money to be made. Strong evidence (which is something conspirators lack) is how Master Steve Heap, from BackyardSilver, manages to increase his earnings month-on-month. In fact, 14 consecutive month increases over the same month in the previous year. He has recently published his 83rd monthly stock earnings report for July 2018. 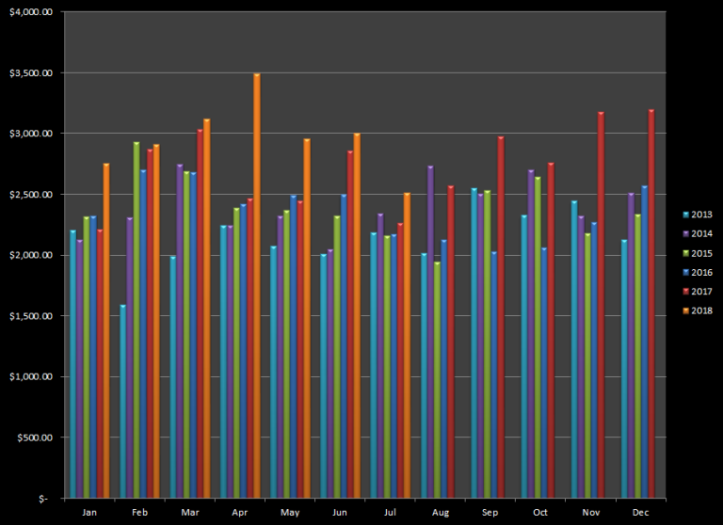 I believe that we must recognise in ourselves that we’re naturally prone to draw irrational conclusions based on short-term and incomplete information. Add a sensitive and emotional topic, such as earnings into the mix, and you get yourself a cocktail of crazy.

This reminds me of my poker-playing days when online poker players complained of the “doomsday switch” that happened when a series of bad hands/situations were allegedly manipulated by the poker sites. Just like being a poker player, we must recognise that being a stock photography contributor has certain elements of unpredictability, but with enough patience, skill and discipline it’s possible to succeed in both camps.

The cream rises to the top!

I’m an eccentric guy on a quest to visit all corners of the world and capture stock images. I’m determined not to waste my life away as a corporate drone and have devoted five years to making it as a travel photographer and freelance writer. I hope to inspire others before it’s too late.

Check out my new photo review service, where I’ll help take your images to the next level and get them sold regularly!