You’ve probably noticed by now that I’m quite of an anti-tourist. If I see a crowd of tourists going one way, I’ll go on the opposite direction! I admit that there may be times when it’s practically impossible to avoid the touristic traps, but I don’t stay there for very long! As for avoiding scams when visiting Italy, check out my latest article on the matter and thank me later.

One such place that I’ve been keen to visit during my recent hop to Venice was the Jewish Ghetto. Oh and of course, I managed to capture some interesting shots even if I wasn’t there for long.

Shouldn’t you head directly to Rialto and Piazza San Marco instead?

Yeah, that’s what 95% of tourists do and those sites are worth seeing for sure (be prepared to pay an arm and a leg for a meal anywhere near there). However, if you’re looking for something slightly different and definitely more authentic, head instead to the Jewish district.

Where is the Jewish Quarter?

Closer than you think. From the Saint Lucia Railway Station, it’s a 10/15-minute walk, firmly in the Bohemian Cannaregio (northern) district of Venice.

The Venetian Ghetto was an area compulsorily segregated by the Venetian Republic to Jews in the early 16th century. It was the first time Jews were segregated within an area of a city. Other places had expelled them such as England in the 1290s and other places in Europe in the 14th, 15th and 16th century, such as Portugal and Spain. More about its history on a short CNN segment.

In Venice, those of the Jewish faith were tolerated only because they were useful, such as acting as money-lenders. Lending money for interest, known as usury, is forbidden as per the Christian bible:

Exodus 22:24 (25)—If thou lend money to any of My people, even to the poor with thee, thou shalt not be to him as a creditor; neither shall ye lay upon him interest. Leviticus 25:36— Take thou no interest of him or increase; but fear thy God; that thy brother may live with thee.

Jewish scripture also forbade usury but tolerated it when it came to people of other faiths.

The idea of the Jewish money-lenders was illustrated (perhaps in hindsight, in an antisemitic way) in Shakespeare’s Merchant of Venice,  with Shylock acting as the the tormenting and tormented Jewish moneylender.

Full emancipation was gained when Venice joined the Italian Republic in 1866.

Due to the lack of space, combined with an increase in population of Spanish (Sephardic) Jews fleeing the Inquisition in the mid 16th century, the only solution was to build up resulting in some of the tallest residential towers of the day. It certainly made for a fascinating melting pot, as detailed in this New York Times Piece:

“When the ghetto was at its height in the 17th century, 5,000 Jews from Italy, Germany, France, Spain and the Ottoman Empire carved out tiny, distinct fiefs, each maintaining its own synagogue, all of them crammed into an acre and a quarter of alleys and courtyards. Confinement was a burden, but it also provided an opportunity for cultural exchange unparalleled in the diaspora. As Jan Morris, a Venice devotee and one-time resident, writes in “The World of Venice,” the city was a “treasure-box” full of “ivory, spices, scents, apes, ebony, indigo, slaves, great galleons, Jews, mosaics, shining domes, rubies, and all the gorgeous commodities of Arabia, China and the Indies.” – Source

The main part of the Ghetto is only accessible by foot on three bridges which would be raised during hours of curfew in the late middle-ages.

The main piazza is the Campo di Ghetto Nuovo, the medieval gathering place for all things communal. 450 Jewish residents, many of the Orthodox branch of the faith, still live in this part of town. 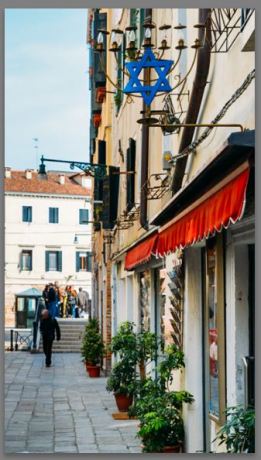 I have to admit that I’m not so optimistic on most of my Venetian images…not because they’re not good, far from it…but because of the existing oversupply!

However, one exception may be these images of the Jewish Ghetto which have much less competition. Added to the fact that I have taken my time to research its history and peculiarities, I believe it places them in great shape to be licensed regularly.

I’ll leave you with this quote on making it at this game from a well known travel photographer:

“The trick is to get access to places that no-one else can get to, and the secret to this is to know your subject better than anyone else.” – Ami Vitale

Hope you found that useful / interesting. Have you had a chance to visit the Jewish Quarter and have some stories to share? If so, please comment below!

Until next time – Alex

Alex is an eccentric guy on a quest to visit all corners of the world and capture stock images . He’s determined not to waste his life away as a corporate drone so he’s devoted his past four years to making it as a travel photographer and freelance writer. He hopes to inspire others before it’s too late.