Evidence indicates that Adobe Stock is emerging as a strong contender to soon overtake Shutterstock as a stock-photography cash-cow for many contributors.

In this exclusive stats-heavy blog post I’ll explore potential trends emerging in this rivalry for the coveted first spot in contributors’ hearts and wallets. This way we can try to draw an accurate picture of what is the reality other than pure speculation. Let’s get started! 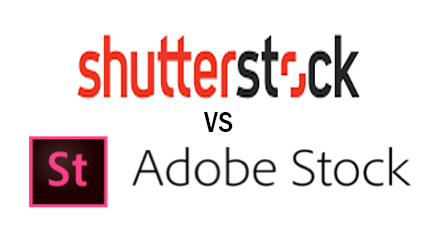 First sign of a convergence in earnings is within the MSG Forum Poll results:

Now, this is a voluntary poll and prone to inaccuracies at best and manipulation at worst. Also, not sure about the sample size. Click here if you wish to contribute to this poll for January results.

Second evidence are my own stats. From my Jan 2020 results, I have the following assets for sale:

With the following results, also as per my last monthly report (January 2020):

Still way behind but there seems to be some convergence in the past few months, even if it means that SS results are decreasing: 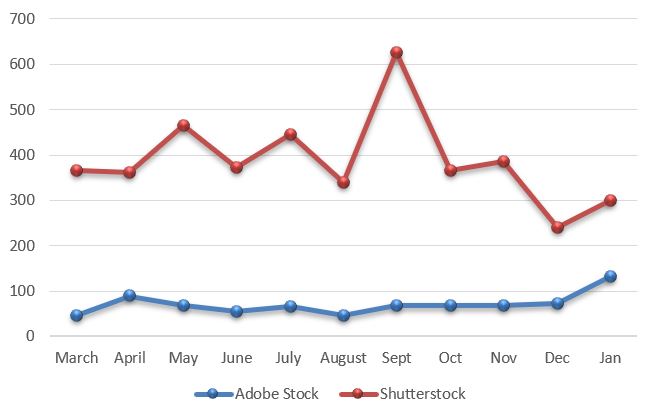 Harmonizing the number of assets

At the moment it’s like comparing apples and oranges since I have 3x as many assets at SS than AS, mainly because AS don’t accept editorials and I was late to the game uploading my stuff to Fotolia prior to it being acquired by AS. Although they do take a liberal view on accepting potentially unreleased content, such as the following:

Taking a shortcut and making some assumptions, if I had as many assets on AS as I do on SS, my results may look like the following (at the least since commercial content is slightly more valuable than editorials, on average):

I do need many more assets on AS because it’s accurate to report that their average return per download, in my case, is consistently higher (on average around 15%) than at SS:

Steve Heap and Elijah have kindly provided some of their owns stats to back up the hypothesis. So let’s examine them. 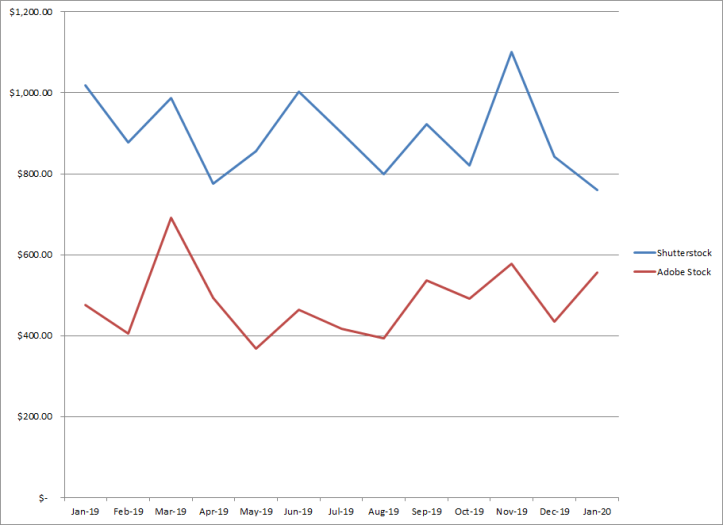 At the end of December, Steve had 14,080 assets on SS and 10,343 on AS. This includes 490 videos on SS and 320 videos on AS. So using the same harmonizing logic, if Steve had the same number of assets on AS as he does in SS, his results would be similar between the two agencies.

Elijah has kindly provided me with his earnings stats on SS vs AS for January 2020 (but had cold feet before publishing them, which is understandable). In fact, chatting with him lately is what inspired me to draft this post since he’s boasting better results on AS than SS lately, even with a smaller port on AS.

“AS really impresses. It is the first time when AS overtook SS in earnings and what makes it even more impressive, it was done without big sales. What is the most impressive though, AS port is only 7K, while SS is twice bigger – 13.5K. The fact that 7K images can beat 13K images on SS is also impressive.” – Elijah

Here’s a link to his SS port and AS port accordingly.

Looking exclusively at what people are searching for on Google, we see that the term “Adobe Stock” is for the past 5 years picking up steam relative to SS’s which is staying about the same. This may suggest more buyers are turning to Adobe Stock.

Does all this analysis even matter?

I do have a sort of reputation of talking round in circles, but I really do want to try to draw meaningful and actionable conclusions from this analysis.  After all, most of us just click one button on Stocksubmitter which uploads to all and then forget about it…so isn’t this all just purely academic? Not quite.

Often, I take the view of my stock business as I would as portfolio manager at a hedge fund. Some assets will outperform others but as long as the final result is in line with projections/growth, things are OK.

However, once in a while I do like to bet more heavily on one agency more than others (as a hedge fund portfolio manager would with a certain asset class), and cut laggards behind. If you’ve been following me for a while you’ll know that I recently stopped uploading to Robert Harding (until results improve) and have invested more heavily in Arcangel book covers.

Adobe Stock  management appear to be making the correct business decisions and also properly rewarding contributors with respectable RPD prices. Therefore, we may want to bet on them more heavily going forward, including to consider applying for their premium collection at Adobe Max.

Adobe Stock is calling for artists to apply for their exclusive program featured at Adobe Max.. More info available on the MSG group forum thread,

On their regular microstock account, it may mean that you can devote more time to creating subjects for Adobe Stock and then keywording more carefully for them. Keep in mind that they care very much about the keyword order within the first 10 words, unlike the other agencies which don’t differentiate in this regard.

For instance, I have inside information that still life flat lays do considerably better at Adobe Stock vs SS.  You may also want to start paying closer attention to their briefs on which subject-matters are trending.

From the above, we may be able to draw the following conclusions:

How do you see the battle between SS vs AS in your own stock business? Comment below!

I’m an eccentric guy, currently based in Madrid, on a quest to visit all corners of the world and capture stock images & footage. I’ve devoted six years to making it as a travel photographer / videographer and freelance writer (however, had recently go back into full-time office work to make ends meet!). I hope to inspire others by showing an unique insight into a fascinating business model.