Editorials at Alamy cont. + Competition with a Prize

I’m quite excited these days as I feel like I’m finally making some progress with my Alamy portfolio. Not sure if it’s just a coincidence but in the past week (since I’ve decided to re-keyword everything), I’ve had 15 zooms and 1 download for $64 gross ($32 net).

Not huge at all, but still nice to know that I’m on the right track, which is important to stay motivated. Here’s the downloaded image of a Chanel shop in St. Tropez, France:

I’m finally starting to crack how submitting editorial images to Alamy works, with some help from their contributor forum.

Since many of the buyers are UK-based newspapers, I decided to go back to my collection of images from London and see if I can uncover some ‘gold’. It’s a pity that some of my best stuff has already been uploaded to Micros (RF), but that’s for another post.

The following are some examples of some images I’ll be submitting as RM (unless otherwise indicated), and why I think they may make for interesting material to support news pieces. I’ll suggest some titles of news stories above the image. Oh and there’s a competition I’ve set up for the last image so read until the end!

Commuting by Bicycle Hits Record Levels in the Capital

It shows a fashionable / hipster part of East London, namely Shoreditch. It’s iconic London due to the red bus and lastly, has a bunch of the action of cycling commuters which has been a big topic for many years. The combination of the above makes it an extremely versatile image.

Even though the composition is a bit off, I still find it a good shot since it proved difficult to capture three buses on a busy intersection this way (without any other major distractions). The red really stands out on a dull rainy day. It screams out London, in a good way.

As you’ve probably gathered by now, I use a lot of red in my images as it makes the image pop. Two things about this image help bring the message home; 1) the Ferrari and 2) Iconic Georgian-style building in the background. Anybody who is familiar with London can pinpoint these buildings to a certain wealthy part of London, notably the South-West (Kensington & Chelsea as well as Belgravia, Knightsbridge).

The British love to speak about property prices (almost as much as the weather), and an image like this may be used to support an article on rising property prices due to foreign money, especially in a time of austerity and Brexit talks.

This is at Speaker’s Corner in Marble Arch…an iconic place where loonies gather every Sunday morning to discuss anything and everything (mainly religion and politics). This image would probably support a non-commercial touristy-sort of article or perhaps a piece of free speech in times of extreme-right wing resurgence. Oh that red again!

Are ‘Boozy Lunches’ Affecting the Productivity of City Workers? 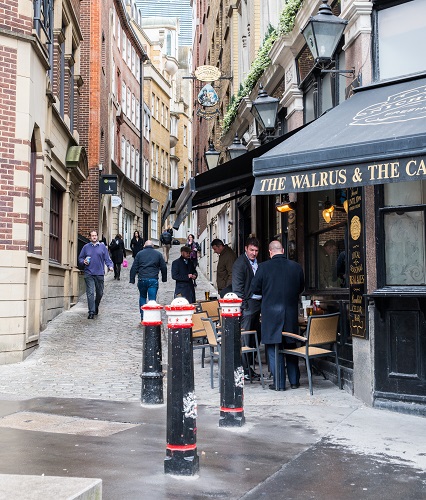 Why not? It’s a street scene of City of London workers drinking outside a pub. How do know it’s in the City of London? Well, because of the symbols on the barriers (red again). This image is quite broad and difficult to pin-point how it may be used. Therefore, due to it’s more generic nature it will be uploaded as RF.

Which Jobs Are at Most Risk of Automation?

The shoe-shine man actually got upset at me for taking this image. Anyway, there’s quite a subservient mood to this capture and may be used to support many different types of news pieces. As per the title, perhaps something about manual workers losing out to machines or a metaphor to the ‘class wars’ in modern Britain. On a side note, I wrote about the ‘rise of the machines’ on a separate article – link is here. Oh that Red again!

Where Did Famous Londoners Live?

The most boring and generic of the list, this image shows a blue plague where the legendary writer, George Orwell, lived in London. Probably many similar images out there as it’s on a major easement in Notting Hill, so I’ll put this up as RF.

Bank of England Members in Turmoil Due to Brexit Uncertainty 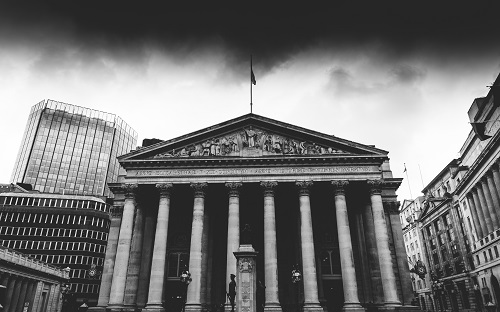 This shot of the Bank of England in the City of London is the strongest shot out of the bunch due to the current uncertainty surrounding Brexit negotiations in the UK. As you can probably gather, I purposely darkened the clouds to add to the somber mood. I also think it’s stronger in black and white.

I’ll end this article with two questions for you.

Answer these two questions in the comment box below and the winner will be awarded a FREE COPY OF MY BOOK!

Good luck and until next time!